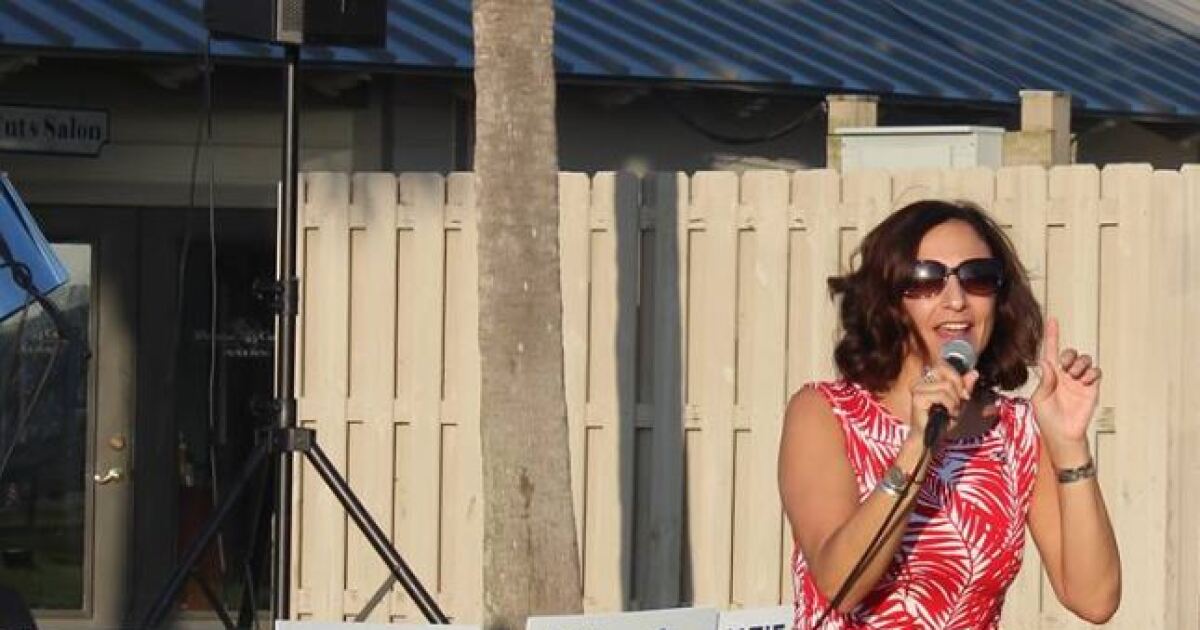 After losing a high-profile bid for a South Carolina congressional seat in 2018, Republican Katie Arrington took a job at the Defense Department, where she focused on securing military supply chains, ensuring thousands of companies that contract with the federal government were implementing cybersecurity protocols.

Arrington’s civil servant work as chief information officer for the Acquisition and Sustainment Office was in line with what she characterizes as her longtime passion for cybersecurity and defense. But as she seeks to revive her political career, Arrington’s time at the Pentagon is becoming a central issue in her campaign.

Freshman GOP Rep. Nancy Mace, whom Arrington hopes to defeat in South Carolina’s June 14 primary, is calling on Arrington to take a lie detector test about why she lost access to classified information. A Mace-funded, anti-Arrington website, meanwhile, has sections labeled “Leaks Classified Information” and “Busted: Loses Her Security Clearance.”

The dispute is likely to surface at a debate between the two on Monday.

The episode reflects the intensity of one of the most closely watched GOP congressional primaries this year. Former President Donald Trump, who endorsed Mace in 2020, has backed Arrington’s bid to unseat her, infuriated by the incumbent’s criticism of him, including his role in inciting the Jan. 6, 2021, insurrection at the U.S. Capitol. The result will be another barometer of Trump’s influence within the GOP as he weighs another potential White House bid.

Mace’s campaign has argued that Arrington’s clearance status is fair game for someone seeking to represent a congressional district with a heavy military population. But in an interview, Arrington insisted Mace was “lying” about the issue. She’s stepping up an effort to rebut the attacks, including providing a sworn affidavit to The Associated Press from an unnamed intelligence officer who worked with her and said he never worried about her handling of classified information.

Arrington’s security clearance was suspended and she was placed on leave from the Pentagon in May 2021 when officials accused her of an improper disclosure of classified information.

Arrington says the incident centered on her communication with a contractor whose name had been revealed in a top-secret briefing she received — an “unmasking” she said had already happened by the time the information came into her hands.

In the interview, she said that during her daily briefing, an intelligence officer relayed to her information related to a possible problem with the contractor. According to Arrington, both she and the officer were surprised the name of the contractor was included in the information but accepted that a higher-up had made that determination.

Being told the company had already been notified of the issue, Arrington said she followed protocol, by first briefing a supervisor before calling the company to see if she could be of assistance — a call that Arrington said triggered the probe that resulted in her suspension.

The intelligence officer who passed on the information has come forth to support Arrington. In an April 27 affidavit shared with AP, the officer — who is not being identified due to his continued employment as an intelligence briefer — wrote that he never had concerns about Arrington’s access to classified information.

“I never saw her mishandle any classified information or documents from that program,” the briefer wrote in a sworn statement. “I am at a complete loss based on my specific knowledge of the matter as to what security infraction was allegedly committed.”

In the affidavit, the briefer also noted that superiors told him Arrington “committed a security violation by sharing information with a defense contractor using unsecured means” and asked him “a series of questions” about Arrington’s political affiliations, which Arrington argues had already been widely known, given her previous congressional bid.

Arrington also said her politics had come up soon after the Biden administration took over at the Pentagon. In early 2021, Arrington said she asked her new supervisor, Jesse Salazar, how much cybersecurity experience he had, to which she says Salazar responded, “Absolutely none.”

“But the part that scared me,” Arrington told AP, “was the question he asked me back: ‘Why are you still here? I thought we fired all you people.’”

Though Arrington had a political background, she was classified as a civil servant at the Pentagon, making such a comment inappropriate, she said.

The Pentagon has declined to comment on Arrington’s employment, citing her ongoing Freedom of Information Act lawsuit over communications related to her suspension, and AP has been unable to otherwise confirm her characterization of the political conversations with Pentagon officials.

In its response to that litigation — which includes Arrington’s assertion that Pentagon officials did not “want Arrington serving in a senior position within the Biden Administration due to her close previous ties with President Trump” — Defense Department officials repeatedly wrote that the accusations “contain Plaintiff’s characterization of alleged background information, not allegations of fact pertinent to the resolution of the claims at issue in this FOIA action to which a response would be required.”

According to Arrington, the briefing officer asked that his affidavit be declassified so Arrington could share it while her Freedom of Information Act claim proceeds against the Department of Defense.

The probe into Arrington’s clearance dragged on throughout 2021, with Arrington suing the Pentagon in October, accusing officials of failing to take “any significant substantive steps to move their investigation forward.” The claim was settled in January, with the Pentagon paying her attorney fees but not providing “any useful meaningful facts to allow Arrington to actually substantively respond to the allegations,” according to Arrington’s subsequent FOIA lawsuit, filed in April.

At no time, though, was her clearance fully revoked, which Mace has claimed. And according to Arrington, she retained her department-issued laptop, cellphone, secure information access device, and diplomatic passport, all of which were viewed by AP at her home.

The National Security Agency referred comment on her dispute to the Pentagon, which declined to comment on the allegation.

Arrington resigned days after her job was dissolved in February, subsequently launching her campaign against Mace.